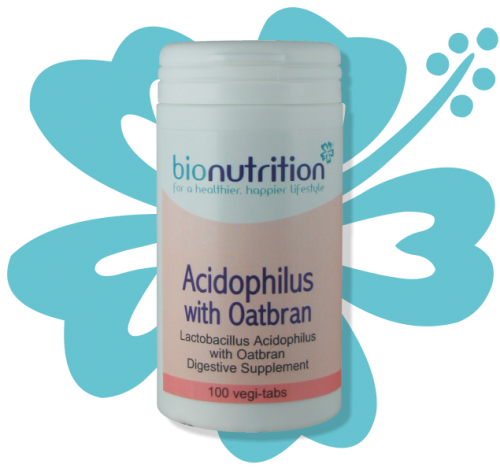 Lactobacillus Acidophilus are a very popular strain of probiotic. Probiotics are a bacteria that favourably alter the balance of intestinal microflora, inhibit the growth of harmful bacteria, promote good digestion, enhance immune function and increase our resistance to infection. Lactobacilli maintain a healthy balance of intestinal flora by producing organic compounds - such as lactic acid, hydrogen peroxide and acetic acid - which increase intestine acidity and so inhibit the growth of many harmful bacteria. Probiotics also produce substances call Bacteriocins, which act as natural antibiotics.

Lactobacillus Acidophilus have been used for many years for the treatment and prevention of many digestive problems, such as, yeast infections, including Candidiasis and Chronic Fatigue Syndrome, diarrhoea, Irritable Bowel Syndrome (IBS), and other bowel infections, Colitis, Crohn's disease and general infections. They have also been shown to improve the immune system function and reduce tooth decay. The addition of Oatbran further enhances the digestive effects by adding bulk to the system.

We would recommend Acidophilus with Oatbran to anyone, but especially those who have recently had a course of antibiotics, to help repopulate the intestine with good bacteria.