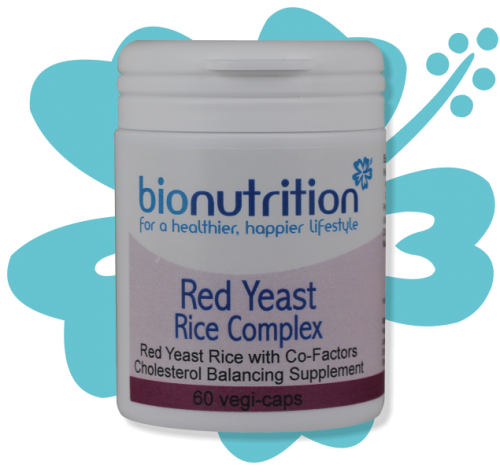 Red Yeast Rice is a substance that has been produced in China since 800 A.D. and used because of its benefits on both blood circulation and digestive health. It is produced by a fermentation process of non-glutinous rice, on which a red yeast is grown. During the Ming Dynasty Red Yeast Rice was used extensively in many applications. In addition to rice starch it contains protein, fibre, sterols and fatty acids, along with many active constituents, including dihydromonacolin and monacolin K. The prime function of Monacolin K and the plant sterols seems to be that of helping balance cholesterol levels!

Psyllium Seed Husk Fibre is as the name suggests a great way of getting fibre into the body, which can have very positive effect on the digestive system. Another beneficial effect that has been noted with Psyllium Fibre is its ability to lower LDL (bad) cholesterol, without having any negative effect on HDL (good) cholesterol!

Vitamin E is a well known antioxidant and as such is used on many occasions to help support the immune system. One little known benefit of Vitamin E is its protective role on cell membranes and other fat soluble parts of the body, including artery walls. This leads to a constant de-furring of artery walls, therefore lowering blood pressure and protecting against a build up of LDL cholesterol.

Co Enzyme Q10 (Co Q10), also called ubiquinone, meaning widespread, is primarily used in the body for energy production, but it also plays a key role in cardiovascular health. It's action is not fully understood, but it has been noted that people with heart problems also tend to have low blood levels of this important nutrient. It has also been advised that people taking Red Yeast Rice should also take Co Q10, so rather than have to take extra supplements we would help by adding it to the Red Yeast Rice Complex!

Vitamin B3 (Niacin) is a water soluble B vitamin, that is essential to the body for releasing energy from carbohydrates, but it also regulates cholesterol. Crucial for controlling homocysteine levels, which have been associated with the risk of heart disease, high cholesterol and high tryglycerides.

Red Yeast Rice Complex combines all of these essential cholesterol balancing nutrients, in what we believe is the best heart & circulatory product available on the market!

There are no comments yet. Be the first to leave a comment
Please sign in to add review
Customers who bought this product also bought